Walter Clevenger moved to Tampa, Florida in 1933. His first real love was building race cars He is credited for the first midget race car. Walter made his own fishing rods, first Bamboo then fiber glass. He began carving lures in 1950 and carved duck decoys as well. His first lures were a Shad type lure though not many have been found. Perhaps only about 20 or so. Walter carved four differant sizes . MIDGET 2 3/4, SMALL 3 1/8, SPIN 3 3/4, large 4 1/8 The lures were named Yawners, Moles, and Tummy Runners. Below is a picture of a Mole. 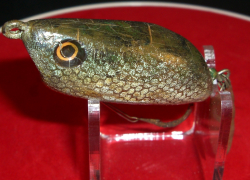