Walt Tedder moved to Florida when he was just four years of age. Walt learned to fish with his grandfather who lived in Orlavista, Florida which is a small town outside of Orlando. The depression was going on so most of the fishing was for food but as he grew up so did his love of fishing. Walt graduated from Orlando High School and shortly after joined the Navy. After the Navy, Walt went back to Indianapolis and married his wife Juanita Walker. Walt’s mother became ill and upon a visit to her home in Florida that was to only be two weeks, it resulted in him never leaving Florida.

Walt worked for the Orlando Fire Department and retired in 1977. Just a block from the fire department was Denmark’s Sporting Goods which was a hangout for Walter Hudson, Jim Pfeffer, Tom Denmark and most of the more popular avid fisherman in this area. He also met H.O. Price who also taught Griner how to make lures.

In 1960, Walt started making his own lures out of wood using a band saw to cut the shape followed by hand carving and shaping the rest by hand. After retiring from the Orlando fire department, Walt was waiting for a job at the Fire Department at the airport to begin and there was 18 months in between. This is when Walt’s lure making was at its peak.

Walt was told by Griner that he had purchased about 300 Robinson blanks, painted them and sold them and most were Popper style. A few days later Walt overheard a man saying he knew someone that had found about 100 unpainted blanks of the Orlando Shiner style and went straight to the source to buy them. Walt Tedder painted them and sold some of these at a charity sale in Sanford. Below is a Walter Tedder lure. Most of his work resembles Jim Pfeffer’s work. 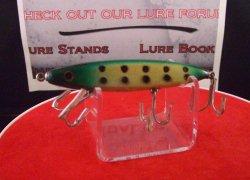