Pfeffer Lures was started by Jim Pfeffer was born on October 2,1885 In Rome , New York and moved to Orlando Florida in 1925. It is believed the Orlando Shiner was the first lure Jim had carved with his pocket knife in 1927. 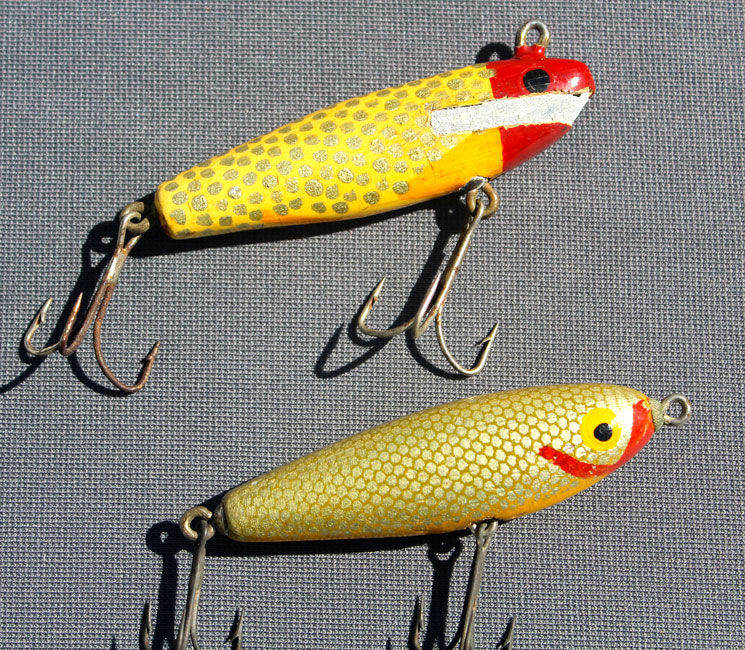 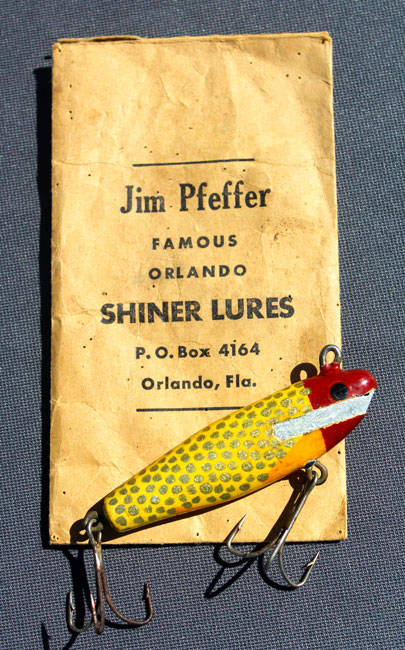 Below are some pictures of Jim & Betty Pfeffer and my earliest Orlando Shiners. The earliest bass scale patterns had a lot more dots and evolves into much larger dots. 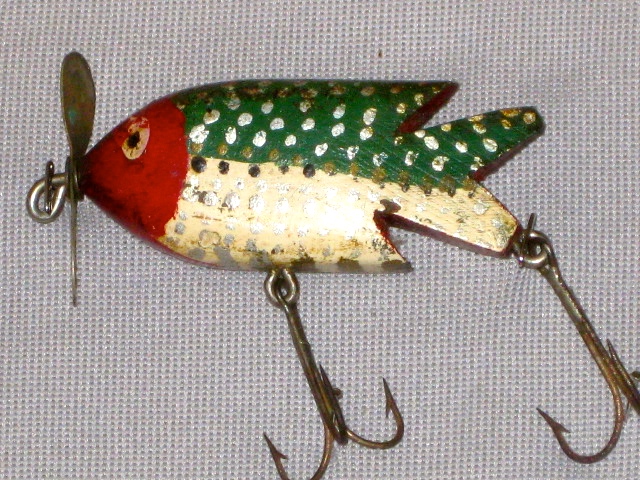 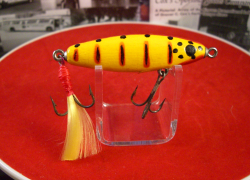 Jim Pfeffer painted some of his lures but his wife Betty did most of the painting. Seen below are some pictures of both of them along with some early lures. 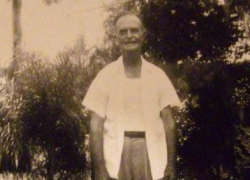 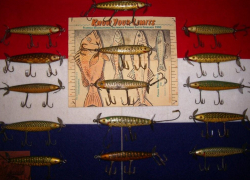 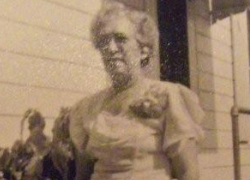 On March 9, 1949 Jim Pfeffer filed an application with the United states Patent Office for the registration of the Trademark BANANA LURES. On MAY 30, 1950 Pfeffer received registration number 575155 for the BANANA LURES. To the left and right of this paragraph there are pictures of some of Pfeffer’s earliest Banana lures. 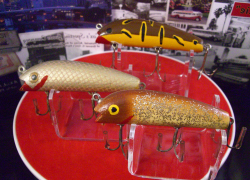 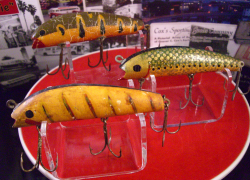 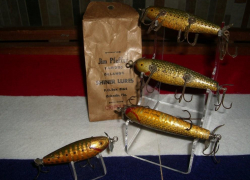 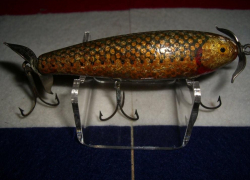 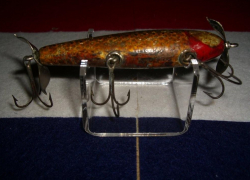 In 1938, Jim Pfeffer purchased spray painting equipment and from that year on most of his paint patterns were sprayed. The red gill marks were painted by hand (some models were still painted by hand in the late 50’s). Pfeffer’s eyes were all black at first and later were yellow with a black center. Hardware is another way of identifying Jim’s early baits. The first being a simple countersunk screw eye without a cup then to a rimless and then a split-lip cup washer, a small full cup and finally a large full cup washer. Below are pictures of A Special Order Color Named Santee Special. This color was made for J.B.Pack of Pack’s Landing on Lake Marion in Rinini, South Carolina. Another Special Color was Winn/Tice made in very small quantities for Billy Winn and Vernon Tice of Orlando, Florida. 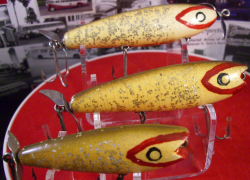 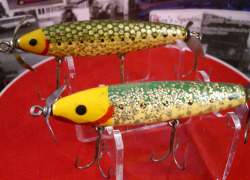 All Jim Pfeffer wood lures came in envelopes of different sizes and with two addresses. One was P.O. Box 4164 and the other a later address was P.O. Box 5164. 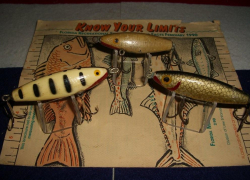 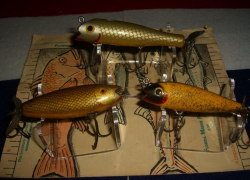 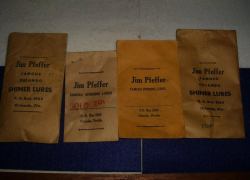 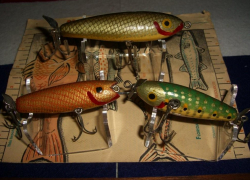 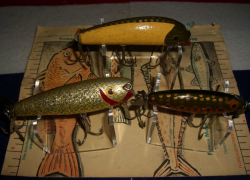 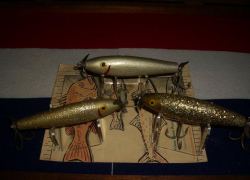 Jim Pfeffer died on June 26,1970 and his wife Betty died several years later after she had sold the rights and remnants to Vic Densmore. Jim Pfeffer is my largest collection of Florida and my absolute favorite Florida lure maker as “No two baits are the same”.

Pat Woodall was born in Clearwater, Florida in 1916 and moved to Alabama when he was a kid but moved back to Florida after high school to find work. In 1946, he worked for Palm Beach Mercantile a hardware and sporting goods distributor in Miami as a salesman. Woodall met Jim Pfeffer in 1952 in Orlando at Denmark’s Sporting Goods, became best friends and eventually business partners. In 1955, Woodall acquired the rights to manufacture the Banana lure in Plastic. At the same time he bought the banana trademark along with the rights to produce it, or so he thought. Some 30 years later he would learn that was not the case.

Pat Woodall Specialties of West Palm Beach was organized to manufacture and sell Jim Pfeffer’s lures. Pat Woodall made the plastic banana in two sizes and in thirteen colors. These lures were to be painted by Florida Fishing Tackle Co. but things didn’t work out at the last minute. George Beckwith of West Palm Beach won the contract to paint Woodall’s lures instead. The first boxes had to have a label applied by hand over the labels on the two piece cardboard boxes to cover “manufactured By Florida Fishing Tackle MFG. Co., Inc.”. 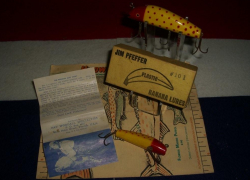 These lures had three different packages . The earliest was a two piece cardboard box, has Jim Pfeffer Banana Lures on the top and on the side is marked Distributed by Pat Woodall Specialties, P.O. Box 1547 West Palm Beach, Florida U.S.A. The second was a cardboard bottom with a plastic top only on the bottom of the box is the Jim Pfeffer Banana Lures with the shape of a banana. In the center is marked Plastic. The sides had the same address as about but on one side of the box says “Yes We Have Some Bananas Today”. The third was a Blister packed card. 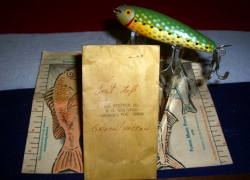 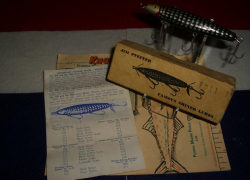 In 1956, Woodall acquired the rights to make the Orlando Shinner and other wood lures and the first right to buy the Pfeffer Co. Woodall had a company make the blanks and Beckwith’s (Who Painted the Plastic Banana’s) was the paint the Shiner, Top, Dilly and the wood Banana. The easiest way to tell the difference between a Woodall and a Jim Pfeffer is the Gill marks . Woodall’s were always sprayed where Jim’s were hand painted.

The Shiners were packaged in two piece cardboard boxes. The top reads Jim Pfeffer, Famous Shiner Lures. These to had a insert as did the Banana, telling the story of The Banana Lure and some Banana lure helpful fishing hints.

Seen below are two examples of the progression of Woodall Papers 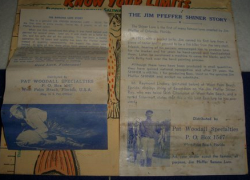 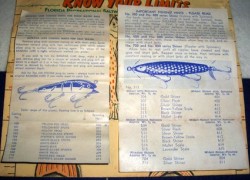 Vic Densmore purchased the Jim Pfeffer Co in 1972. Vic literally backed up his truck and and removed everything of Jim Pfeffer’s (What a Lucky Man). Big in blue water fishing for Kingfish, Vic Densmore’s favorite lure was Jim Pfeffer’s Sailfish Shiner and by 1971 he could not find any. He went to Denmark’s Sporting Goods in Orlando and talked to Walter Hudson Jr. and found out Pfeffer had died and his wife was selling the business. Densmore purchased the business, the rights to the trademark for the Banana lure, and registration #525,790 which Pfeffer received May 1950. In 1973, Densmore put together a one page sheet with fourteen lures and on the back was the type of lure and what was recommended to fish for. These were to be the lures and the colors but several other colors have been found. Densmore did make the Santee Special for Lake Marion, South Carolina but called it Snake Eyes. Densmore said the streak on the back was dead grass green and Pfeffer’s were more of a dark brown. Densmore reported the King Banana was a poor trolling lure and it would dive but would breach and he didn’t like that. Reportedly he flattened the head and cut the mouth Hence the Google Eye was born. 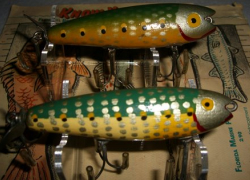 Densmore said his biggest seller was the Dilly but Jim Pfeffer’s was always the Shiner. When Densmore cleaned out the shop he didn’t find a mold for the Hud-Chug and asked Don McAllister about it.

His reply was that it was a Cast Top just shortened and was named after a good friend of Jim Pfeffer’s named Walter Hudson Jr. Densmore said he made this lure in large numbers but we all know these are very hard to find.

Densmore’s Lateral line dots, eyes and gill marks are one way to identify his work. His lateral line is always blended and is the easiest way to tell the difference between Pfeffer and Woodall’s works. The eyes are also much bigger then Pfeffer’s. 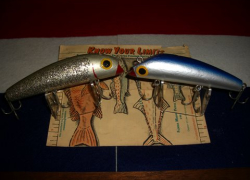 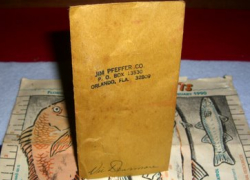 Densmore used a Envelope that was Stamped with his address (Picture Above) on it. Two lures the Spin Dilly and the Mullet have been found with a buck tail. Colors were Pink, Yellow, Green, White and Brown and are made from Nylon. Jerry Ergle who helped with the Goggle eye tied all the bucktails for Vic. Vic Densmore stopped making lures in 1978 and is retired and is living in Florida. 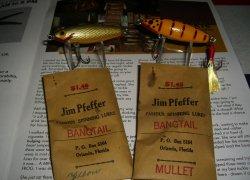 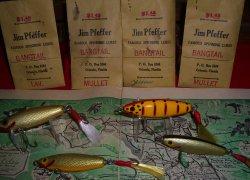 All of the content on this page has been graciously provided by collector Scott Watkins. If you have any questions regarding this information or have any Pfeffer Lure related inquiries, please contact us using the form below.