A Foreword about Chris Emerson

My name is Chris Emerson and I have been collecting L&S for about twelve years or more. I chose to collect L&S because they were plentiful, affordable, and disregarded by most collectors at the time. I have an extensive collection of lures and other company related information that I would like share with you through this website.

In this section on L&S you will find it as a work in progress. I have tons of information to go through and will try to organize it in a fashion where it makes sense. There are several timelines and changes that took place along the way which I will try and nail down. Most of the information comes from magazine ads and catalogs that I have collected. This site is a great opportunity for me to get organized and for you to learn and enjoy. If you have something to add or dismiss about information in this section please contact me. I also encourage you to send me photos of your L&S lures and anything else company related.
-Thanks, Chris

The story goes that Harold LeMaster started making lures for himself around 1933. He called them, “LeMaster Shiner Minnows” which were jointed, hand-crafted lures made from walnut. He made them to catch bass and walleye on the Kankakee River in Illinois. Harold’s lures apparently caught plenty of fish and became quite popular with the local fisherman. The rising popularity of Harold’s lures slowly turned into a commercial endeavor. By 1937 Harold LeMaster made, assembled, and sold lures commercially from the basement of his home. It’s at this time he took in a business partner named Phil Schriner to aid in the process. The business grew until 1941 when operations were halted temporarily by World War II.

“LeMaster Shiner Minnows” were jointed, hand-crafted lures made from walnut. 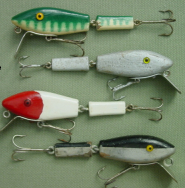 Following the war, production resumed in 1946 and the L&S (Lemaster & Schriner) Bait Company was born. It’s at this time the first production plastic lures were introduced. The plastic bodies were outsourced from a Chicago based molding company. The partners eventually purchased their own molding machine after experiencing quality control, and shipping problems with their source. The business quickly outgrew the confines of Lemaster’s basement and eventually operations were moved to a factory in Bradley, Illinois.

The next few years the Bradley facility would produce its, “Famous Line of Lemaster Shiner Minnows” such as the Bass-Master, Muskie-Master, & TroutMaster. Soon to follow would be the Pike-Master, Panfish-Master, and the BabyCat.

In 1950 L&S opened a second factory in Clearwater, Florida. This southern division of L&S would introduce the new, “Sensational Mira-Lures” later named, “Mirr-O-Lures”. The company would operate both factories for years and an array of new models would hit the market. The Mirrolure line, which offered dozens of models and colors for both fresh and saltwater. Soon to follow Mirrospoons, Poppers, Spin-Masters, and many more.

The L&S Bait Co. would eventually move all operations to Clearwater, and later to Largo, Florida in the late 1970’s after Phil Schriner sold his interest in the company. Harold Lemaster passed away in January of 1988 but the company lives on to this day. L&S Bait Co. is still offering new models/colors and has become a household name in the saltwater lure market.

All of the content on this page has been graciously provided by collector Chris Emerson. If you have any questions regarding this information or have any L&S Bait Co. related inquiries, contact Chris Emerson by CLICKING HERE