Jack was carving his lures in the 40’s in Tampa, Florida and knew it would be a great lure because it would pop and dive. Jack was born in Manchester, Tennessee on April 8,1908 and came to Florida in 1928 answering an ad in the paper asking for people to help find bodies after one of the worst hurricanes had hit Florida. He ran out of money on the way back to Tennessee and never made it past Tampa.

Jack applied for a patent on February 10, 1950 and was granted on January 16,1951 Patent #161,620. The early baits Jack hand carved but later had them turned. He painted his own baits himself and had help later on to keep up with demand. The Spot King was made in one size and in three colors; Frog, Speckled Trout and Silver Flash. For several years, the Spot King was the King of the tackle shop and had Florida Fishing Tackle Manufacturing Co. making his baits. But as time went on in 1954, Florida Fishing Tackle made a bait that was very close to his and was to eventually end his venture. The lure was packaged in a plastic box and marked “Spot King By Jack’s Baits Box 7104, Tampa FL” painted or printed on the end. 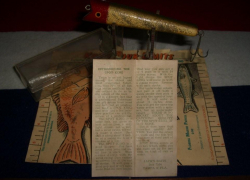