Fred Flood’s Parents were from Enniscorthy, County Wexford, Ireland. Mr. and Mrs. Flood sailed to America and on February 22, 1886 arrived in New York City with their 7 children. Shortly after, they traveled south to Fort Meade and purchased a home. Fred went to school during the day and there he learned to farm, hunt and fish as the Peace River was right in his back yard. When he turned 20, Fred went back to New York for work. Things didn’t work out and he joined the U.S. Occupational Forces and moved to Cuba. While in Cuba, he met his wife Nellie Gaffney. In 1911, Fred moved to Frostproof where he cleared 5 acres of land for citrus. Sometime in the 1920’s, Fred began whittling his shiners out of cypress while he nurtured his citrus trees and hunted and fished to feed his family. His first crop finally came in 7 years later. It was sold and he made enough money to build a proper home for his family. 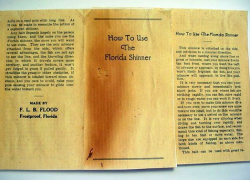 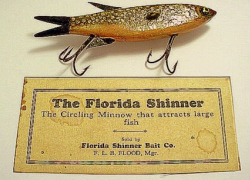 Fred built a porch on the front of his house. It doubled as his fruit stand, as it was located right on Alt. 27. As Fred’s grove was producing fruit and providing an income for his family, it allowed him to spend the time he needed on his lures, which were in high demand. E.D. Achter, of St. Joseph Missouri, had been staying in one of the cabins that Fred had rented behind his house. Achter offered to turn his lures for him in trade for rent when he came back the next season. The next year, Achter returned with 12 dozen body’s in 3 different sizes, all made of willow wood. The lures were 5 inches; 5 3/4 inches; and 6 1/2 inches. It is told, that 7 gross of body’s were made over a 7 year period. In the fall of 1926, Achter supplied the body’s for the very first time. Fred made a few of these and sold them to friends and locals. All were aluminum in color. 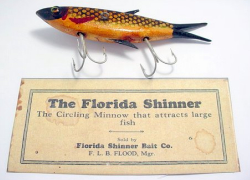 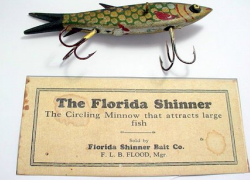 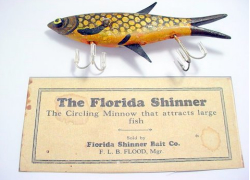 In 1925, James Backus started dating Flood’s daughter, Florence. They were married in 1929. That is when Fred convinced James to help paint his lures. In 1927, the first Florida shiners were in a color other than aluminum. The colors were to match the wild shiners from different lakes at different times of the year. Below are the colors that the lures were painted. (There were 6 in all including the Aluminum:)

The lure boxes were sized for each of the 3 lure sizes and included a pocket catalog. The top of the box reads “The Florida Shinner, The Circling Minnow that attracts large fish. Sold By Florida Shinner Bait Co, F.L.B. Flood, Mgr”. In 1933, the great depression set in and production had ended. Fred Flood died on July 10,1960 at the age of 82 . This Folk Art Lure is one of the Florida Lures that started me collecting Old Florida Lures.

(Pictures on this page have been provided courtesy of Allen Stephens)

Much of the information on this page was obtained by utilizing the information provided by Doug Brace, Bill Stuart, and Russell Riddle in “Florida Lure Makers and Their Lures” (Currently out of print). The information we have provided is only a portion of the story. If interested in purchasing this book, please reach out to other collectors in our Forum to inquire about availability.