Not a whole lot is known about Ellery Gregg . The only documentation is from public records. First found in Bristol, Connecticut in 1935. An article in a 1935 Outdoor Magazine have him running ad for Flies . Saying ” Free How To Tie Flies ” send for a catalog of Fly Tying Materials.Gregg’s Artificial Flies, Bristol, Conn . Three catalogs have been found and were believed to be dated somewhere between 1935 and 1944 and at this point nothing is know about Ellery except his involvement with Fly baits and Fly tying materials. Not until 1945 did Ellery again surface and now in Florida. An ad from a Sports Afield Magazine, July 1945 was an ad for the Crazy Swimmer. The Crazy Swimmer came in six colors. 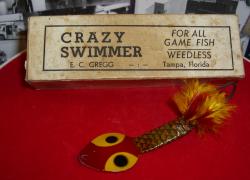 Packaging for the Crazy Swimmer is a two piece cardboard box . The box is white with black lettering. On March, 30 1955 a corporate charter was granted to Nylure Bait Company Inc. Bradenton, Florida. The President was E.C.Gregg, P.O.Box 235 Bradenton, Florida. Follow the story of Nylure in CAPTAIN ACTION