Don Boone was borne in Charleston, South Carolina and moved to Florida in 1948. When Don was 12 years old, he bought a Fly Tying kit and was making flies for extra money . In 1951, Don formed the Boone Bait Company and was incorporated in 1953. The company shareholders and directors were Joseph and Arlyne Showalter along with Don Boone and his wife Vera Boone with both couples owning equal shares of the company. The first factory was an airport hanger on Highway 50 at a small airport in Orlando and is funny to me now because at the end of the runway is a lake I have fished for specks in many times. Speck fishing is a quiet type of fishing in Florida you basically drift across the lake till you find them and anchor up.

In 1957, Boone and Showalter had a falling out and Boone attempted to buy Showalter’s share of Boone Bait Company but it was Showalter who ended up with the company. Don Boone went on to form Don’s Baits of Goldenrod.

PETER FOLEY was born on February 15, 1936 in Norwalk, Connecticut. He graduated in 1961 from St. Lawrence University in Canton, New York. Peter received his MBA at the University of Chicago in 1976 and was looking for a company and approached Sandy Showalter about purchasing the Boone Bait Company but was told it was not for sale. Peter became friends with Showalter and worked a deal to purchase half of the company in 1978.

In 1992, the manufacturing of Boone Baits were made in the Philippines and ship back to Casselberry, Florida and distributed from there. The First Boone Logo was the Coon Skin hat on the B on Boone (see below).

The Spinana was Don Boone’s first bait he offered in 1952 (below left). The Boone Needlefish was designed for Trout fishing (below right). 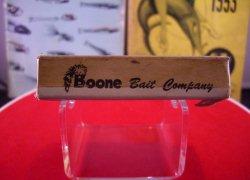 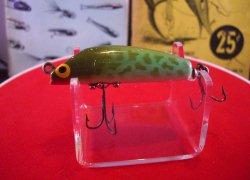 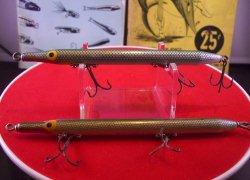 In 1957, for a one year period Gaddis Gadabout who was a famous TV sports fishing personality was backing some selected Boone lures that were featured with Gaddis’s name. Below are just a few of the baits that were offered in this line in. 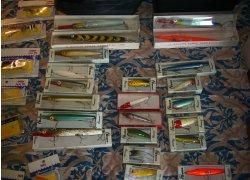 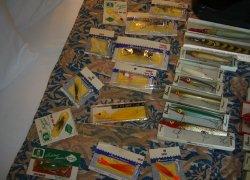 More on the Boone Bait Company will be coming at a later date, but we wanted to go back to Don’s Baits from the beginning of the story for just a minute…

More on what happened to Don Boone after the sale and split-up with Showalter will be coming soon.